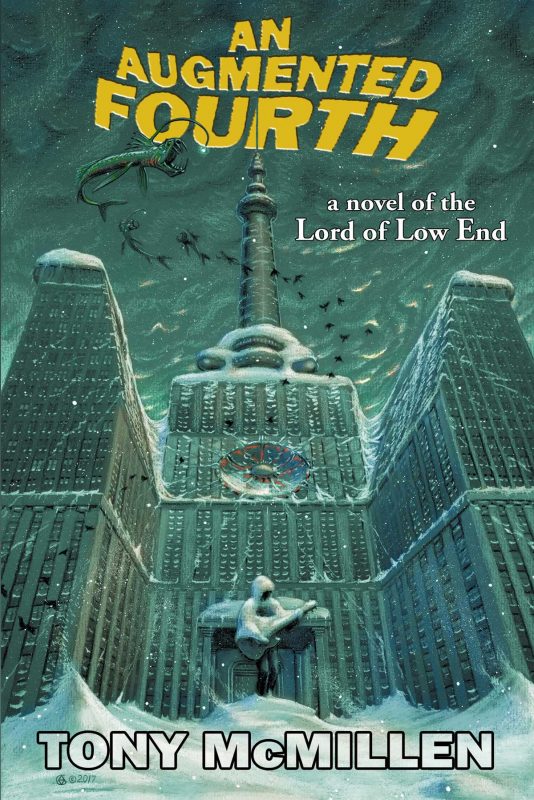 From the twisted mind of Tony McMillen comes the hilarious rock and roll horror of An Augmented Fourth, a novel of the Lord of Low End. Look for An Augmented Fourth at better independent booksellers everywhere, and most online retailers. Copies with signed bookplates are available direct from Word Horde.

About the Book
A Novel of the Lord of Low End

Codger Burton, bassist and lyricist for Frivolous Black, the heaviest heavy metal band to ever come out of the UK, awakens to find his hotel snowed in, his band mates evacuated, and monsters roaming the halls. Looks like Codger picked the wrong week to quit using cocaine. From the twisted mind of Tony McMillen comes the hilarious rock and roll horror of An Augmented Fourth, a novel of the Lord of Low End.

TONY McMILLEN is the author of the novel Nefarious Twit and the graphic novel Oblivion Suite. He grew up mostly in Tucson, Arizona but now lives outside Boston with his wife and their invisible dog whom they call Invisipup. It’s all so very damn precious. He writes, draws and plays the guitar but seldom all at the same time.

Visit him online at www.tonymcmillen.com.

“Tony McMillen’s An Augmented Fourth (2017) is heavy metal rock and roll horror at its wailing-guitar best. Set in 1980, the point of transition from heavy metal to punk, An Augmented Fourth blends inter-dimensional eldritch horror, David-Cronenberg-movie grotesquerie, and psychedelia in a thrash-metal twenty-minute-guitar-solo of a story.” –Marion Deeds, Fantasy Literature

“This is a wildly entertaining novel that is both a hilarious deconstruction and a tender love letter to rock and roll. McMillen has a knack for dialogue and that helps the action and the story move forward at breakneck speed. […] If you think you’d dig watching a psychedelia-infused version of The Thing while blasting awesome tunes and having a great acid trip, then you need to pick this one up.” –Gabino Iglesias, LitReactor

“An arcane cosmic horror descends on the day of a heavy metal musician whose own music might just have been the dagger that sliced open the veil between the worlds. Tony McMillen’s novel is love letter pastiche to the occult mythos of rock by way of a mystically-tuned hotel, tentacled horrors, and inter-band relationships, as well as the real-life toll of a debauched life. McMillen’s love of music and occulture is infectious. An Augmented Fourth has me wanting to search for hidden clues on my old album covers all over again.” –Peter Bebergal, author of Season of the Witch: How the Occult Saved Rock and Roll

“Tony McMillen’s rock and roll fantasy is a fucking blast. This thinly veiled misadventure combines proto-metal lore with Lovecraftian tradition to birth a heavy hybrid written at maximum volume. Behind the music, in a world much like our own, the devil’s chord, church bells, rain, thunder, and weed all coalesce around a hilarious narrative that takes Frivolous Black bassist Codger Burton through withdrawals, cosmic tribulations, metamorphosis, Brummie banter, and world-shaking epiphanies. Tune in, turn on, rock out.” –Nathan Carson, author of Starr Creek

“Since Nefarious Twit, Tony McMillen has become one of the most unique writers I’ve read. Over the past weekend I had the great pleasure of cracking his forthcoming, An Augmented Fourth–it’s metal to the balls The Thing meets Black Sabbath riffing Thunderhorse cranked to 11. You guys are in for a treat come June.” –Chris Irvin, author of Ragged and Federales

“A ferocious and funny read, full of foot-chases, body horrors, and the requisite screeching monster immolation or two, even some fun wish-fulfillment for connoisseurs of heavy-metal cover art as one of the band’s mystery models literally jumps off one of their albums and into the action. […] To put it all in clearer terms for easier shelving at the video store, think This Is Spinal Tap meets The Thing meets From Beyond. Actually, there wasn’t a shelf for the new genre he’s conjured up here, but there should have been. In the meantime, I’ll be over there waiting for the soundtrack LP so I can scratch it up playing backwards messages.” –David James Keaton, author of The Last Projector

Aaaaand we’re (nearly) done! 😮‍💨📦😆 Only a few Corpsemouth and Mr. Gaunt orders remain and will ship tomorrow. Thank you all for your support of independent publishing and your patience and understanding throughout this process! pic.twitter.com/2dKeID5Kox