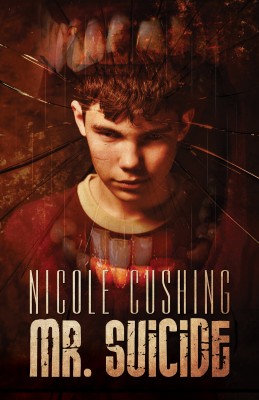 About the Book
Like everyone else in the world, you’ve wanted to do things people say you shouldn’t do.

Maybe the impulse flashed through your brain for only a moment, like lightning, when someone tried to skip ahead of you in line at the cafeteria. Hell, at more than one point in your life you’ve wanted to kill someone; really, literally kill someone. That’s not just an expression. Not hyperbole. Then it was gone and replaced by the civilized thought: You can’t do that. Not out in public.

But you’ve had the thought…

NICOLE CUSHING is the Shirley Jackson Award-nominated author of multiple stand-alone novellas and dozens of short stories. Her work has been praised by the pop culture websites Ain’t It Cool News and Famous Monsters of Filmland. Several of her stories have been selected as honorable mentions (long list) for Ellen Datlow’s Best Horror of the Year series. Her first full-length short story collection, The Mirrors, is also slated for publication in 2015. A native of Maryland, she now lives with her husband in Indiana. She’s active online and welcomes contact with readers via Facebook and Twitter.

Visit her online at nicolecushing.wordpress.com.

“Novels don’t come much more transgressive than this one, folks. Got a taboo? Watch Nicole Cushing grin while she dances all over it. In other hands that might be reason enough for the witty Mr. Suicide to exist. But this is more and better than that—a truly nightmare world, richly imagined, told to us in a canny, subversive second-person voice that makes you, the reader, the hero of this tale, like it or not. That it also manages to be ultimately life-affirming is yet another wonder.” —Jack Ketchum, award-winning author of Off Season and The Girl Next Door

“Nicole Cushing comes in smart and hard, skilled and strange times three. Many aspire. But you can’t fake this kind of weird.” —John Skipp

“Nicole Cushing uses her sharp and confident prose like a surgical instrument to dissect both her characters and our emotions. Mr. Suicide is horrifying and harrowing, but just as much for the emotional devastation it causes in the reader as for the violence and depravity—as well as the twisted humor—it portrays. This is horror fiction that leaves marks.” —Ray Garton