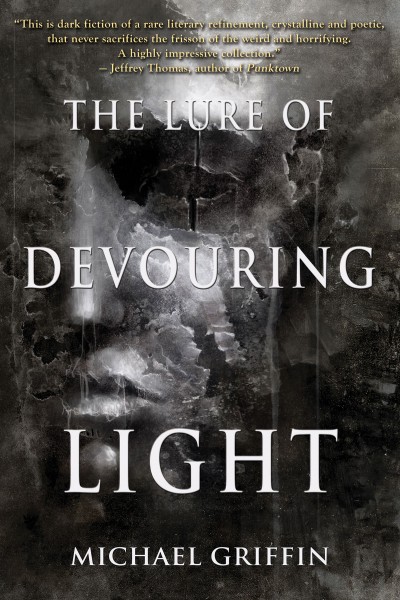 About the Book
Over the last few years, Michael Griffin has been heralded by critics as an author of breathtaking skill, melding the aesthetics of quiet horror, dreamlike wonder, and the strangeness inherent in the classical weird. Readers have sought his stories, scattered throughout prestigious anthologies, magazines, and limited-edition chapbooks, hoping to assemble their own collections of Griffin’s ferocious, poetic fiction.

Experience for yourself The Lure of Devouring Light.

MICHAEL GRIFFIN has lived in Portland almost his entire life, even before it was the coolest American city. He’s worked over 23 years in a factory that cuts huge chunks of steel into smaller ones, and spends as much time as possible running, mountain biking, roving on beaches, and skiing, snowshoeing and hiking on Mt. Hood. He’s also an electronic ambient musician (as M. Griffin, and half of Viridian Sun) and founder of Hypnos Recordings, the ambient music record label his wife helps run.

Griffin’s stories have appeared in magazines like Black Static, Apex, Strange Aeons and Lovecraft eZine, and such anthologies as the Shirley Jackson Award winner The Grimscribe’s Puppets, the Laird Barron tribute The Children of Old Leech, and Cthulhu Fhtagn!. His standalone novella Far From Streets was published by Dunhams Manor Press. He recently finished his first novel and is anxious to begin his second.

Visit him online at griffinwords.com.

“This book is a solid outing from a rising star in horror and dark fantasy.” —Publishers Weekly

“Mike Griffin skillfully works the rich seams of quiet horror and contemporary weird. The Lure of Devouring Light is a superb selection of strange stories. It’s the kind of debut that should command attention from genre fans and critics.” –Laird Barron, author of The Beautiful Thing That Awaits Us All

“Michael Griffin’s fiction is sleekly poetic, disorienting, light and fierce. With this debut collection, Griffin establishes himself as a writer of already matured sensibilities, fiercely dedicated to the exploration of pain. Merciless.” –Michael Cisco, author of Animal Money

“Often, Mike Griffin’s stories isolate an extraordinary dynamic between individuals who can only sustain the strange world they inhabit, secretly and together, with abject devotion to it. Anything short of passion will cause a rift in the narrative they’ve created, disclosing uncertainty, selfishness, ambition. Opening old wounds, or asking new questions. (For example, is love worthwhile or even possible set against a natural environment we’ve degraded beyond recognition? Or, what kind of integrity will we maintain if the monsters come for us?) At his finest moments Griffin achieves either a luminous grace or a breathtaking plummet into the unknown. In both cases the shock is earned by the tale that precedes it, and the stakes are as high as they can get. What I admire most (and there is plenty to admire in his writing) is an unforced, elegant ability to make his characters matter to us, in all their preening desire and almost magical expressions, like people we’ve known, loved, and left behind when all the bad shit happened—but with deep regret.” –S.P. Miskowski, author of the Skillute Cycle

“The focus in these stories is often on relationships that cause the characters to analyze how they intersect with the lives of others, and to contemplate their lives as individual beings—these examinations reflected outwardly in an environment of nightmarish disorientation and dreamlike transformation. This is dark fiction of a rare literary refinement, crystalline and poetic, that never sacrifices the frisson of the weird and horrifying. A highly impressive collection.” –Jeffrey Thomas, author of Punktown

The Lure of Devouring Light Reviews