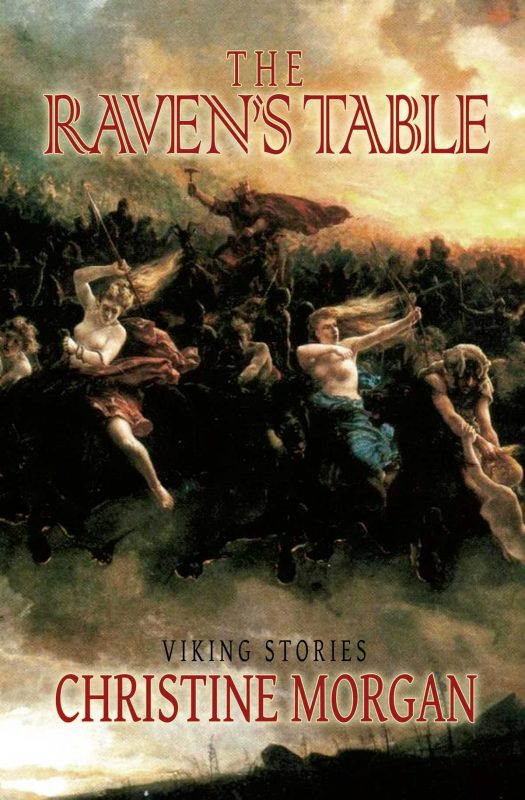 From Christine Morgan comes The Raven's Table, a collection of tales to rouse your inner viking. Look for The Raven's Table at better independent booksellers everywhere, and most online retailers. Copies with signed bookplates are available direct from Word Horde.

About the Book
Listen…

The Barrow-Maid
Thyf’s Tale
The Fate-Spinners
The Vulgarity of Giants
In the Forests of the Far Land
Njord’s Daughter
A Feast of Meat and Mead
Nails of the Dead
Sven Bloodhair
The Mottled Bear
To Fetter the Fenris-Wolf
At Ragnarok, the Goddesses
With Honey Dripping
Aerkheim’s Horror
The Shield-Wall
The Seven Ravens
As We Drown and Die
Brynja’s Beacon

CHRISTINE MORGAN grew up in the hot, sunny desert, and moved north to get away from it as soon as she could. Her degree in psychology has served her well, particularly in helping her to land a night-shift residential counseling gig, which allows her some writing time in the wee small hours. Twice married and twice divorced, she now lives with a roomie and a bunch of cats, and has a grown daughter of whom she’s eternally proud. Her lifelong loves of language, history, mythology, and horror all intersect best in the Viking age. An avid reader and reviewer and crazy craft/cookie lady as well, she’s currently delighting in adding her own little touch of weirdness to the Portland writing community.

“These works have the sure, solid feel of a talented author deeply engaged with her source material and genre. They’re an excellent read for those who enjoy myths and legends of all kinds.” —Publishers Weekly (starred review)

“…stories that will make you want to don your helm, sword and shield before riding off into battle.” —The Grim Reader

“The Raven’s Table finds the horror at the heart of Viking culture. The stories scare you silly and creep you at the same time that they shed real light on life in the medieval North. Want to know what it really felt like to live in the Viking age? Read this book!” –Professor Michael D. C. Drout, Wheaton College