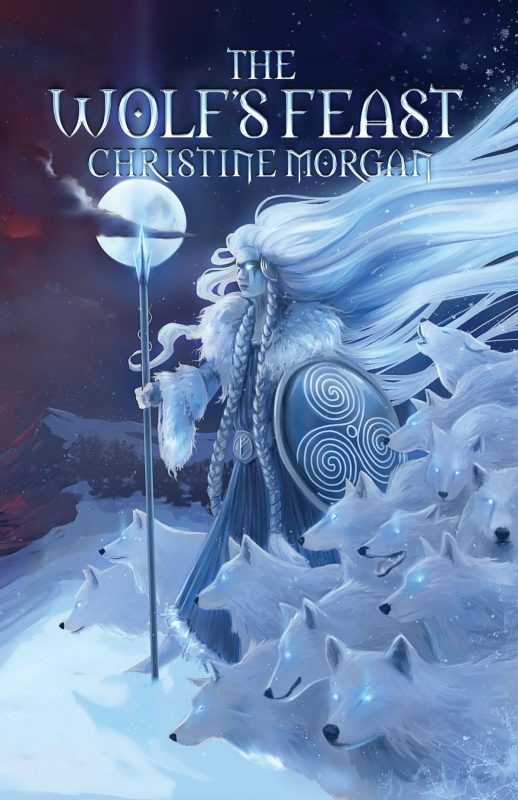 From Christine Morgan comes The Wolf's Feast, a collection of tales to rouse your inner viking. Look for The Wolf's Feast at better independent booksellers everywhere, and most online retailers. Copies with signed bookplates are available direct from Word Horde.

About the Book
Silence…

The skald pauses her tale. Time passes in heartbeats. Every sound echoes, continues a fragment of the story. The crash of distant waves invokes the whale-road, long ships traveling its path, their sides covered with brightly painted shields. The creak of ropes reminds you of Jormungandr, the Midgard Serpent, the world wrapped in its scaly embrace. Faraway wolves howl and call, echoing along the path to Niflheim, Hel’s realm of the dead.

The skald gives you a knowing glance, then takes a drink of her mead before continuing. And then, her voice: low and sonorous, musical and rhythmic, begins once again to weave the tapestry, telling tales of heroism and horror, glory and loss. She sings of heroes and everyday folk, tricksters and tale-tellers, standing tall and facing gods and monsters. Vikings!

For more than a decade, author Christine Morgan’s Viking stories have delighted readers and critics, standing apart from the anthologies they appeared in. Now, Word Horde brings you The Wolf’s Feast, a new collection of Christine Morgan’s Vikings, from “The Viking in Yellow” to “Odin’s Eagle” and beyond. These tales of adventure, fantasy, and horror will be sure to rouse your inner Viking.

CHRISTINE MORGAN recently bade farewell to the cool and cloudy Pacific Northwest to return to her ancestral roots and reconnect with family in sunny Southern California. After thirty years working in residential psych facilities, usually on the overnight shift, she’s decided to take the plunge as a full-time writer. She also edits, reviews, makes weird crafts, bakes cookies, gets bossed around by her cats, and is probably way too into dinosaurs for a woman her age.

“Norse mythology comes to life in this collection of 22 wonderfully enigmatic stories and poems from Morgan. […] Infused with mythology and magic, these dark tales cast a powerful spell.” —Publishers Weekly