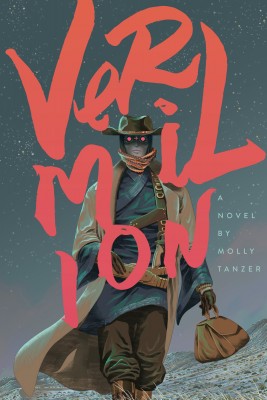 About the Book
Gunslinging, chain smoking, Stetson-wearing Taoist psychopomp, Elouise “Lou” Merriwether might not be a normal 19-year-old, but she’s too busy keeping San Francisco safe from ghosts, shades, and geung si to care much about that. It’s an important job, though most folks consider it downright spooky. Some have even accused Lou of being more comfortable with the dead than the living, and, well… they’re not wrong.

“Tanzer’s first novel is a splendid page-turner of a Weird West adventure. […] This hugely entertaining mixture of American steampunk and ghost story is a wonderful yarn with some of the best dialogue around.” —Publishers Weekly (starred review)

“Old West steampunk has another appealing heroine in Lou (pair her with the equally winsome female lead of Elizabeth Bear’s Karen Memory) to go along with the delightfully over-the-top villains. The pages turn themselves in this debut novel from a small press that deserves a big audience.” —Library Journal (starred review)

“Vermilion is fresh and strange — a dark and sparkling story of magic, monsters, and mystery in the Old Weird West. Gloriously weird and heartfelt, it’s a credit to the genre from start to finish.” —Cherie Priest, author of Maplecroft and Boneshaker

“Tanzer’s debut novel is extraordinary, portraying a world that is engagingly curious and curiously engaging. One doesn’t realise how much one’s life has been missing a story about a Chinese/English buster of violent ghosts out in the wilder end of the Wild West until one reads this. Plus, talking bears.” —Jonathan L. Howard, author of the Johannes Cabal novels and Carter & Lovecraft

“An amazing debut novel from an author to be reckoned with, Vermilion is most definitely Top Shelf.” —David Bowles, The Monitor

“Vermilion is a fun puzzle, a gender-and-genre bending romp. […] Tanzer creates a fantastical world that holds together, with a fantastic character at its heart.” —Fantasy Literature