Home > Books > We Leave Together 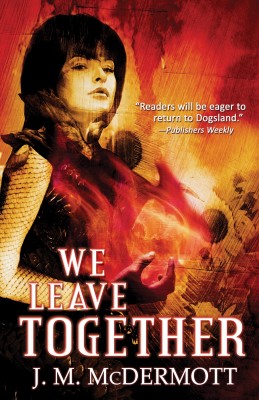 Completing the saga began in the critically-acclaimed novels Never Knew Another (2010) and When We Were Executioners (2011), We Leave Together provides lush, character-driven, fantasy fiction for readers who revel in the small moments, movements, and truths of life. Look for We Leave Together at better independent booksellers everywhere, and most online retailers. Copies with signed bookplates are available direct from Word Horde.

About the Book
In a city where the rich stage decadent parties as the poor suffer in squalor, where assassins prowl and king’s men keep order with truncheons and force, where gangs of children run like dogs and addicts die in the streets, a demonic strain has taken hold. The shape shifting priestess and priest of Erin have come to Dogsland stalking a fugitive, half-breed Senta Rachel Nolander, and plot to burn her to cleanse the world of her demon-tainted blood. Led ever onward by Rachel’s corrupted lover’s crying skull, Erin’s agents seek their hapless quarry, a frightened girl guided by one promise, one hope, one prayer… We Leave Together.

J. M. McDERMOTT is the author of six novels and two short story collections, including Last Dragon, Never Knew Another, Women and Monsters, and Maze. He holds an MFA from the Stonecoast Program at the University of Southern Maine.

Visit him online at jmmcdermott.blogspot.com.

“Readers will still find Dogsland a grittily imagined fantasy world, with a personality as vivid as any of its residents.” –Publishers Weekly

“McDermott has, from page one, a powerful and clear storytelling voice, and a strong control over his language. You leave the book utterly invested in all the people you’ve just met.” –SF Signal

We Leave Together Reviews