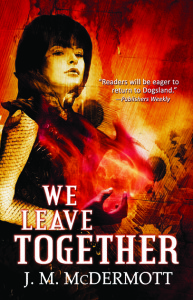 Word Horde announces the June 15, 2014 release of J. M. McDermott’s We Leave Together, the third and final book in the Dogsland trilogy.

PETALUMA, CALIFORNIA—In the decadent city called Dogsland, a desperate search is about to draw to a close. Mystical, wolfskin-clad agents circle their prey, Rachel Nolander, drawn to her by visions captured from her fallen lover’s skull. Rachel’s blood is demon-tainted, burning and sickening those around her as she hides in plain sight, passing as a servant in a strange and savage land.

Completing the saga began in the critically-acclaimed novels Never Knew Another (2010) and When We Were Executioners (2011), We Leave Together provides lush, character-driven, fantasy fiction for readers who revel in the small moments, movements, and truths of life. J. M. McDermott has created a world where mere survival—passing as human in a city filled with potential betrayers—is an ongoing struggle requiring heroic actions.

“I like fiction deeply rooted in characters,” explains McDermott. “If my characters act heroically, it is because people must act heroically sometimes. When you are an outsider to society, heroics are required just to lead something resembling a normal life.”

The long-awaited publication of We Leave Together is sure to satisfy those seeking the resolution of Jona and Rachel’s ill-fated romance and new readers alike. Publisher Ross E. Lockhart says, “Having worked with McDermott extensively on the two prior Dogsland novels, I’m proud to have We Leave Together as Word Horde’s first novel release. This is a book of endings and beginnings, lavishly told and peopled by a master storyteller.”

We Leave Together is distributed by Ingram, and will be available in Trade Paperback and eBook formats through most online retailers and better independent bookstores everywhere in June 2014. For more information about Word Horde or to request a review copy, please email publicity[at]wordhorde[dot]com.