Today, Word Horde’s social media maniac Sean M. Thompson talks with one of the preeminent tastemakers of the Bizarro and Weird Fiction scenes, part-time Valkyrie, and darn fine writer, Nikki Guerlain. Here’s what she had to say…

You come upon a pen, and it can only write truth. What do you do with the pen?

It would be super tempting to go all Star Chamber with the pen. That said, I would probably give it to Michael for Valentine’s Day. That would make a great gift, yeah? He’s loads more responsible than I am. I’m sure he would figure out a brilliant way of using it that wouldn’t involve me possibly going to jail. 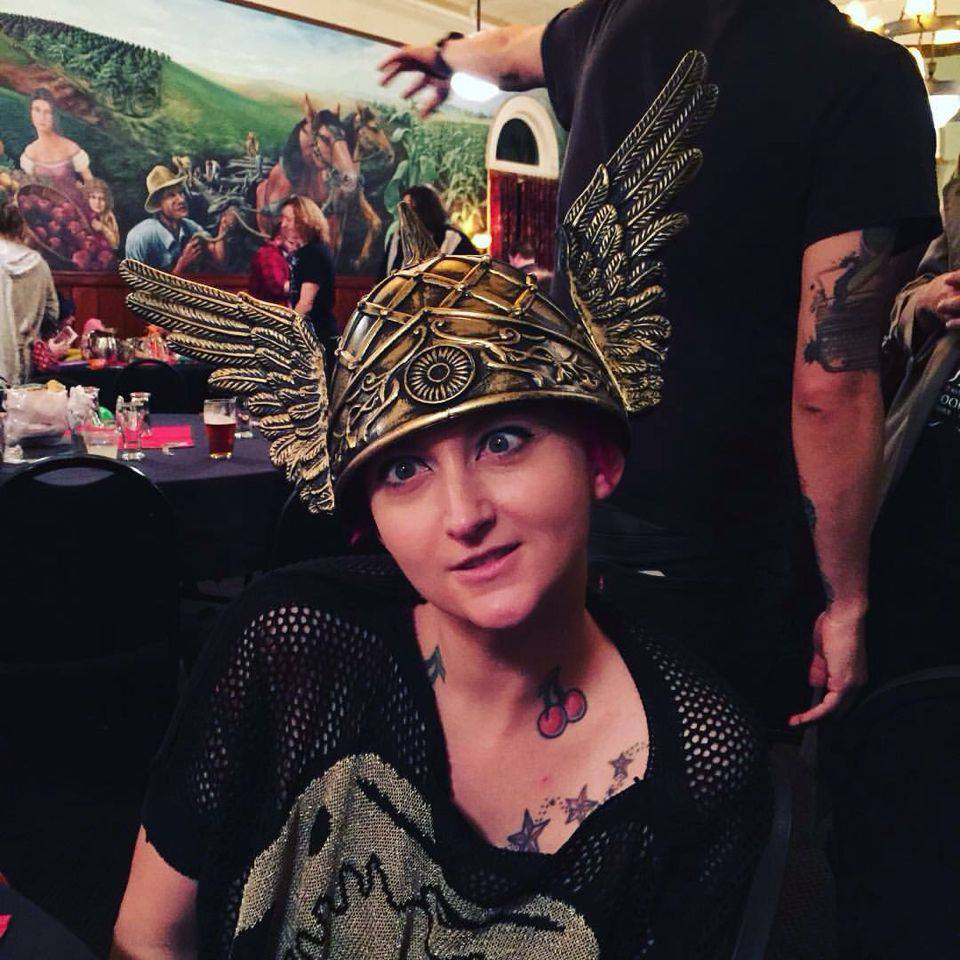 What role do you feel genre plays in fiction?

Genres are playgrounds. The more playgrounds the better. Categorizing fiction by genre is just a method of bringing the most promising readers to a particular book. It would be interesting to drop genre altogether and categorize fiction by its intended emotional impact. You know, you walk into a bookstore and you tell the clerk, “You know, I want something that will bum me the fuck out.” And the clerk points you to the Bum Me the Fuck Out section and everything from dark fiction to drug addiction memoirs to books on global warming are all there getting cozy with each other just waiting for you to pick one of them up for your much yearned for bad trip.

Of course, this would get extremely complicated and you’d always have readers who fell outside the intended emotional response categories–but these people know who they are and would have no problem finding what section they needed. And hey, while they’re hanging out ironically in the Bum Me the Fuck Out section of the bookstore why don’t you sell them a shirt that says “Nihilism Makes Me Wet” and donate a portion of each shirt sale to the Make a Wish Foundation?

Honestly, if we want to get more readers to books they’ll enjoy without the genre hang ups we’d start using movies and television and other visual media as short hand. You know, like If You Enjoyed X Movie You’ll Likely Enjoy Y Books. We need better, quicker, more evolved ways to communicate the potential experience to the would-be reader than simply genre.

Now I’m thinking I didn’t really answer the question I was asked which is entirely possible. I will say that the idea that literary fiction is somehow better than genre fiction is total shit. Either something is written well or it isn’t. It’s totally gross to be around writers who look down upon other writers for the genre they write in. Eww.

I have FUCK tattooed across the knuckles of my right hand. It’s my favorite because it’s been the best ice breaker/litmus test ever. This tattoo has brought many awesome people and conversations into my life. Nothing makes me smile wider than when someone asks me if my right hand really says FUCK. 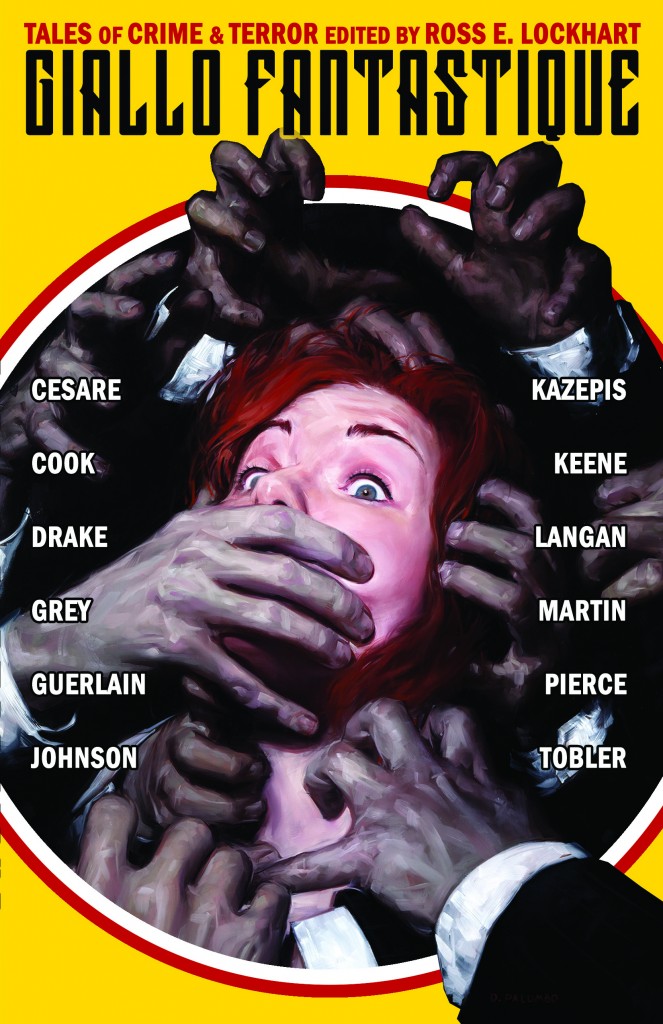 Your story from Giallo Fantastique, “Terror in the House of Broken Belles” has a fair amount of eroticism to it, albeit a twisted and deranged sexuality. Do you think that writing about sex is something the bizarro genre embraces over other genres, and if so, why do you think other genres such as, say, weird fiction shy away from sexual themes?

I can only speak for myself and I wouldn’t categorize myself as strictly a bizarro writer. I write fiction that falls in many categories. To me, bizarro is more an attitude–a spirit–than a genre with strict conventions. It has a willingness to play where others might not due to any number of things: taste, propriety, lack of market. Bizarro covers a broad range of work. It can be quiet or quite loud and juvenile. Bizarro does what it wants to and fuck you if you don’t like it–it doesn’t need your approval or respect. That doesn’t mean it doesn’t deserve it. It just means that the writer isn’t fettered by social norms. The work succeeds or fails on its own grounds. Sex is more fully embraced in bizarro than in other genres because the writers aren’t afraid to go there–they’re expected to. It’s a little harder to justify a brekkie bukkake scene with a toaster in “literary” fiction. I mean, you could do it but you’d have to build it up so much and justify it endlessly and it’d take over the entire novel. In bizarro, you can have a brekkie bang and move on with the rest of your day in the space of a couple sentences just like you’d do consuming any normal breakfast. More. Weird. Shit. Faster. Move. Move. Move. Just because the content can be batshit crazy doesn’t mean it’s not written well. Bizarro writers know and trust this. This makes them very free to do whatever it is they want to do which often involves sex.

As far as weird fiction is concerned, I think BIG IF weird fiction writers do shy away from sexual themes it might be because they fear not being taken seriously or it could be that it’s difficult to deal with sex subtly. I don’t think this is the case. I write weird fiction, but in it I have elder gods wearing meatsuits and you better believe there’s going to be a squirrel and a moneyshot and bewbs somewhere in there. Why? Because I I like to play. I want to break any genre I play in. Genres are toys. I want to break them and rebuild them in a way that is mine. I want evolution. I want to piss off the stodgy old guard and usher in the new. I want to show people that there’s room for nearly anything in any genre if written well. Weird fiction is evolving and it comprises more than just a handful of writers that get repeated over and over. Weird fiction and bizarro have a lot in common and I expect that they’ll come to influence each other more and more.

How many gifs do you look at per day?

Oh my gah. I look at maybe a hundred gifs a day. I post a fraction of those. I love gifs because they are moment based. They usually encapsulate a moment or a beat. Other times, they are relaxing meditations. I think the simplicity and brevity of the gif form can have a tremendous impact on someone’s headspace. Gif=play. They have become more important to me and my friends than any of us could have ever imagined.

Do you have any writing rituals? Personally I like to smear my shoulders in guacamole, throw on some Stevie Nicks, and take a massive amount of bath salts. The bow tie is of course, optional…


I do have writing rituals. I drink a fuckton of tea, take loads of baths, and usually have a movie or music on in the background. I also do a lot of sprint writing. Fifteen minutes here and there during the day. I write for prolonged periods late at night. I eat a lot of grapefruit when I write. I feel I’m at my best when my mind is loose from sleep deprivation or stimulus overload. 99% of the time I’m stone cold sober during the actual sitting ass in chair part of writing, but I take notes constantly. I write the vast majority of my stuff longhand first so by the time I type, I’m really at a third draft or so. I inhale candy, burn candles, and often write naked. When I get stuck, I do ridiculous things like ask my friends to send me pictures of their dicks in shoes because it’s funny and irreal and brings me back to that “I’m not in reality” headspace I need to write. Writing is serious business but sometimes I have to step back to enjoy it and nothing tells me not to take myself too seriously like an unkempt semi flopped into a Victorian slipper addressed to me me me from a loving and indulgent friend. Oh my gosh. I’ll just stop there.

What is it about working with Ross Lockhart that you find so enjoyable? Is it the advice decreed by his mighty hair?

Working with Ross is amazing because he’s genuine and sincere and he’s got some serious balls to accompany his professionalism. Ross is one of my favorite people on this planet. I will do anything for him. Plus, yes, he has awesome hair.

You got anything to plugeth?

1) Michael Cisco’s Animal Money (Lazy Fascist Press) Yes, he is my honeybunny but only because he is absolutely extraordinary. Also, have you seen the cover?

2) Chesya Burke’s The Strange Crimes of Little Africa (Rothco Press) After listening to Rob Cohen and Christine Roth gush about it, and knowing Chesya is awesome, I’m *totes* excited about digging into this one.

3) Leena Krohn: Collected Fiction edited by Jeff VanderMeer (Cheeky Frawg Press) This one is enormous and I can’t wait to educate myself with it!