Recently, Sean M. Thompson had a chance to talk with J. M. McDermott about his Dogsland novel, We Leave Together.

For the readers who might not be aware, tell us about your fantasy series, the third book of which in the series is We Leave Together?

I lost an uncle many, many years ago to HIV. He was gay. As an adult, years later, right around 2005, 2006, I was living in Euless, TX. The Hurst-Euless-Bedford Metroplex was not exactly always a place that was very friendly to people who were not part of the mainstream religious right of our culture, in the places where I often found myself among the bookstores and bars and coffee shops. Creationism was openly contested and scoffed upon. Megachurches that spouted hate from the pulpit and contested science grew and grew, with evangelists all over trying to pull more people in.

When dating someone, I’d casually bring up Creationism in conversation as a form of self-protection against destructive anti-Science ideologies.

At the time, I imagined what it must be like to be gay in a world openly hostile to that way of being, and having to stay sort of hidden about it. Going to work, going to the store, going home, and always with the specter of the revelation containing an edge of potential violence: verbal abuse or even genuine, physical danger — and God save the transgendered person discovered in parts of that town!

I imagined back into history, and across history, where for so long so many people didn’t even have the word to express what they felt about other people, knowing only the fear of being discovered. I imagined the police officers going around and raiding gay bars, beating up homeless gay and lesbian people who had been kicked out of their homes — rendered homeless — for just being themselves. People around me at the time — not my friends, mind, just people — talked openly with such pride in their voice about the poison of homosexuality and all sorts of awful, spitefulness. And, they talked this way while the very people they openly reviled were probably just a few tables down in the coffee shops, going to a different, more tolerant church around the corner, and/or sitting at the edge of the bar. Hatred is such an awful thing. I hate hatred.

So, I can go on at length about this, because this subject can piss me off something fierce, and I carried that anger quietly for a long time. My uncle was a good person, and he didn’t deserve to be called all kinds of poison, and he didn’t deserve to die of such a poison as that awful disease, and to be separated from his family and community because of their hatred of him. He passed in ‘93, when I was just 13, and I was only just learning the meaning of the word that people called him in my cloistered childhood. Again, as an adult and an author, that was in the neighborhood of 2005, 2006, gay marriage was not even something the average person would know about, much less consider viable to become a law of this land. Tolerance was just not the way things were done, then, for a large portion of our country. It wasn’t even imagined. The only thing that was imagined was the evil and sin of the orientation.

I figured with fantasy I could make this imaginary poison real. I could invent a world where there were people who actually had this poison in them as infectious as others seem to think the gay is, in its way. And, as I would reveal in the books, it wouldn’t matter if the demon stain was real, because they’d still be humans. As well, treating people like monsters has a great way of creating monsters out of people. I thought about the larger message of tolerance, and injustice, and how cities and communities eat themselves, and how it is all connected in cycles of misery and suffering.

I thought that if I wrote about two gay men in love, the people who most need to read about the humanity of the other would assume the book wasn’t for them. So, I wrote a heterosexual love story, instead, with Jona, the disgraced lord of a noble house fallen into poverty and ruin, and a Rachel Nolander, a mystic woman who never believes that she will find peace, much less love. Both carry a stain that makes the very blood and sweat and tears of them a toxin to everyone around them. I wrote about the city that eats their poor, as the large cities of Texas do. I wrote about a lot of things that angered me that I saw in the world around me. I wrote about nature and the city and the relationship between what is natural and what is cultural. 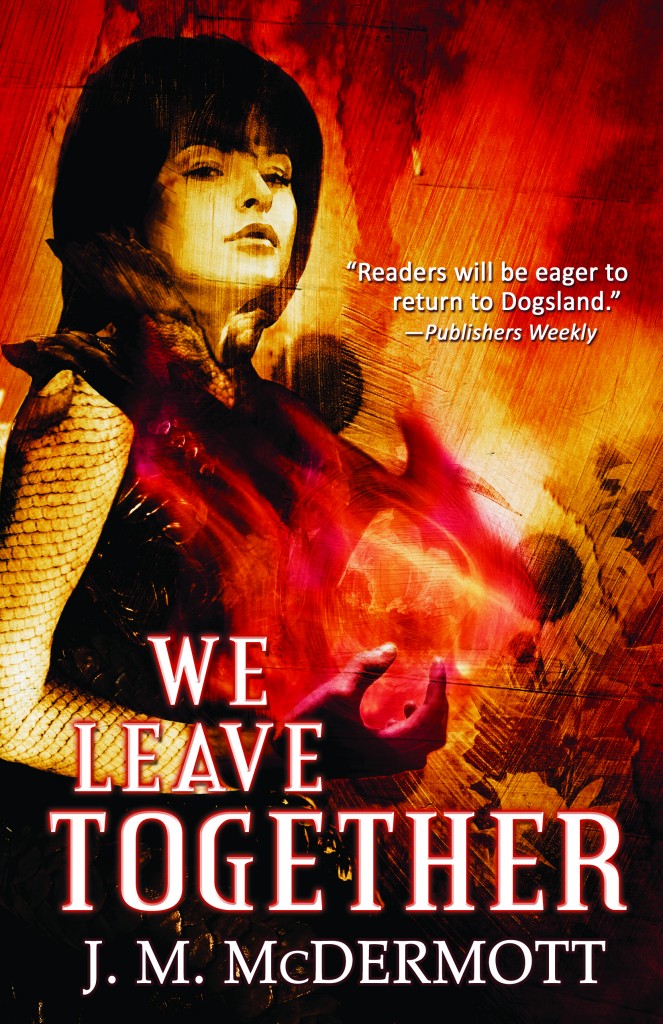 I don’t know in the slightest, and the older I get, the less I know.

Do you consider yourself a spiritual person?

Whenever I take D&D personality tests, and I’ve taken a few, I actually test as a True Neutral Druid nine out of ten, and a True Neutral Monk, for that lingering one.

Beyond that, I will say only ‘Yes’.

How long did it take you to write We Leave Together? Have you ever had a faster turn around on a book you’ve written?

I prefer to forget as much as possible about the books that I have written, because it makes it more likely that I will write another one. It is like going to the dentist. If I think about the procedures too much, I’ll never go back.

I also try to write a new kind of book every time, to make sure I don’t write the same things over and over. Every new book is starting over brand new, and I learn how to write again every time.

Who are some of the writers that you admire?

Lately, I have been enthralled with Julian Graq, Haldor Laxness, and Zachary Jernigan. I am writing a lot of science fiction, of late, and I have a very difficult time, I feel, escaping the shadow that Maureen McHugh spreads across my imagined futures.

If demons existed, what do you think their end game would be on Earth?

Demons exist on earth, but we don’t call them that. Daemons of pure energy, pure sin, that exist only to consume and corrupt are here. They have no corporeal form, but they pollute the corporeal with their energy and corruption of human will. We call them corporations, and I think the end game is consumption of all things, a sort of uber-monopolistic entity that touches every industry, extracting everything from them, where the system of extraction is more important than the people who live and work inside the system.

I have written about this twice, in fact. In the short story ‘Hestia’ in my collection Women and Monsters, the only way to preserve endangered species and homeless men is to devour them and turn them into shit. In my novel, Straggletaggle, the end game of industry is splayed out, a perfect rule of corporate law and efficiency, devouring everything until nothing is left of man and soul and green grass and birdsong, and it is the most terrible and frightening thing in the world.

Corporations are daemonic. They don’t have to be evil, but self-interest and self-interested actors make them so far too often for my taste and comfort.

What are you working on currently?

I am nearly finished with a deep space colony of quantum clones, and their unillustrious Astral Navigator. It is a novella heavily influenced by The Opposing Shore by Julian Graq, and The Tartar Steppe by Dino Buzzati. In my opinion, much of military science fiction details very exciting things, and much of the actual experience of most military personnel is terribly dull and sort of theatrical in nature, pretending to be at war, or pretending to be warriors, so to speak. The vast majority of soldiers never even fire an epithet, much less a gun, in the direction of an enemy. I thought I should write a military science fiction piece about that, for a change.