There’s something colorful in the air, things seem super-saturated, and a synthesizer soundtrack just cut in, so we are declaring this month to be Giallo July. To celebrate, we’ve dropped the price of the Giallo Fantastique ebook to just $2.99 (Kindle, Kobo, Nook) for the duration of the month. What’s your favorite shade of horror? 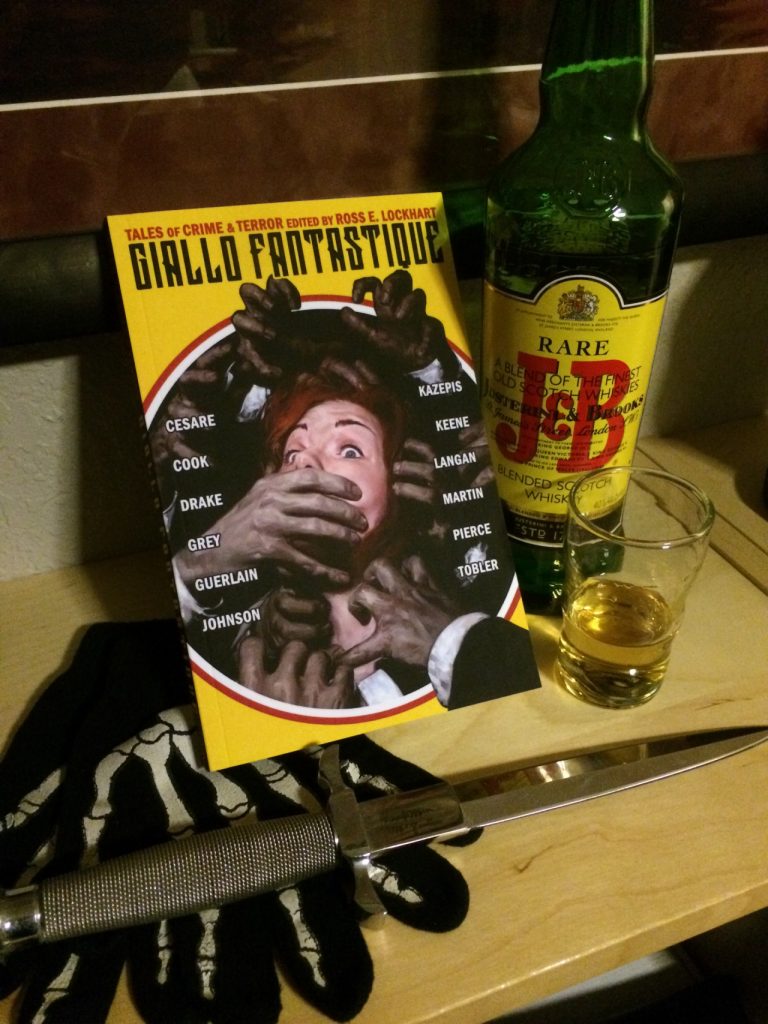 An anthology of original strange stories at the intersection of crime, terror, and supernatural fiction. Inspired by and drawing from the highly stylized cinematic thrillers of Argento, Bava, and Fulci; American noir and crime fiction; and the grim fantasies of Edgar Allan Poe, Guy de Maupassant, and Jean Ray, Giallo Fantastique seeks to unnerve readers through virtuoso storytelling and startlingly colorful imagery.

“Lockhart translates giallo fantastique as weird crime, and each story, while very different in style and tone, melds crime and supernatural horror with panache and verve. […] The stories’ conclusions are never definitive, leaving the reader with a delicious sense of lingering unease.” —Publishers Weekly

Earlier this week, Sean M. Thompson sat down with Mr. Suicide author Nicole Cushing, to ask her a few questions. Here’s what Nicole had to say:

What made you want to join with Ross and the Word Horde?

Finding a publisher who is a good fit for you is somewhat analogous to dating: once you’ve been doing it awhile you know what you like, what you need, and what you should run from.

Ross is excited about books that take chances and don’t necessarily follow the conventions of the tentpole projects released by corporate publishing. So, artistically, we’re on the same wavelength.

At the same time, he struck me as someone who knew the business end of things pretty well and was committed to helping offbeat books maximize their audience. (That impression is, if anything, only reinforced by the work I’ve done with him since signing on.)

I know some people find genre labels to be limiting or even counterproductive, but I think genre (and subgenre) labels give us a helpful shorthand method of describing various types of fiction and the communities that love them.

Why is transgressive literature necessary?

Because it’s the only tool that can accurately communicate the emotional core of certain extreme experiences. In my opinion, conventional literary approaches fail when they attempt to depict trauma, poverty, addiction, underground subcultures, homelessness, violence, and certain varieties of mental illness.

Increasingly, American culture feels a need for all art to be created according to the polite, considerate, and safe dictates of the superego. But I suspect the best works of dark fiction come from the id.

What inspired you to start writing Mr. Suicide?

The short answer is…life. Mr. Suicide is a warped, funhouse mirror depiction of how I (and some of my classmates) grew up.

The main character is a composite. Some aspects of him are autobiographical, some are drawn from my memories of troubled family members, but others (including some of his most disturbing facets) come from a boy I knew in high school who said outrageous things that–even after all these years–I can’t forget.

It’s like I had a blister on my brain for the last twenty-five years. Mr. Suicide was one of the ways in which I lanced it.

I also should acknowledge the influence of a brief talk given by Jack Ketchum called “Writing from the Wound”. (You can find it on YouTube or in the archives of the Odyssey Writing Workshop podcast.) After listening to Jack’s talk, I felt I had no choice but to “go there”.

What are some of your favorite transgressive novels?

Ketchum’s The Girl Next Door, Last Exit to Brooklyn by Hubert Selby, Jr., The Maimed by Hermann Ungar, Exquisite Corpse by Poppy Z. Brite, The Folks (a novella) by Ray Garton, This Way for the Gas, Ladies and Gentlemen (a story collection) by Tadeusz Borowski, Tropic of Cancer by Henry Miller, and Excrement (a memoir) by Crad Kilodney.

What have you been working on lately?

I’ve been working on the last bit of polishing of my story collection The Mirrors (in preparation for its impending, official release). I’ve sold a novella called The Sadist’s Bible (which I can’t say much about, until the contract is signed). Speaking of contracts, I just signed one with Dark Regions Press to provide a novella (as yet untitled) for their forthcoming anthology I Am the Abyss.

I continue to write nonfiction articles for the UK-based horror film magazine Scream.

Also, I’m working on a novel tentatively called Knife & Wound and I’ll be contributing short stories to a number of anthologies in the coming months.

It’s a full plate, but I’m excited and grateful to have so much work.

I have the same fears everyone else does. I pride myself on my ability to look my own mortality in the eye (without resorting to belief in an afterlife). But the truth is I’m just as scared of dying as anyone else. I’m also scared of the inevitable death of my loved ones. I’m not crazy about heights. Hell, I’m even scared of the possibility that one day I’ll face financial struggle again.

Nothing too noteworthy, there.

But I do have my oddball (perhaps irrational) fears, too. For example, I’m scared of the U.S. falling into an economic or political crisis during my lifetime. I also have a variety of strange, entirely irrational, idiosyncratic anxieties that have sometimes made my life a bit difficult. And I’m scared of things no self-respecting horror author should admit they’re scared of. My hubbie and I once had a skink in our basement that scared the shit out of me. Loud, sudden noises have sometimes gotten to me, too.

I hate to admit these things. It makes me sound like such a wimp. It makes it sound like I can dish out fear but I can’t take it. So I’ll finish this interview by talking about something that highlights my status as a badass. I’m not afraid to be rude to door-to-door salesmen, religious proselytizers, or politicians. I once told a group of political canvassers who defied the “no soliciting” sign on my door that I would make sure to vote against their candidate simply because they bugged me. (I wouldn’t really vote on that basis, but it was worth saying it just to see the expression on their faces!)

If you’re in the Indianapolis area, catch Nicole when she reads and signs copies of Mr. Suicide at Indy Reads Books on Thursday, October 29 at 6:00 p.m. Details here: http://indyreadsbooks.org/