Christine Morgan’s viking-themed collection The Raven’s Table will be landing later this month, so our intrepid interviewer, Sean M. Thompson, sat down to compose a few questions… 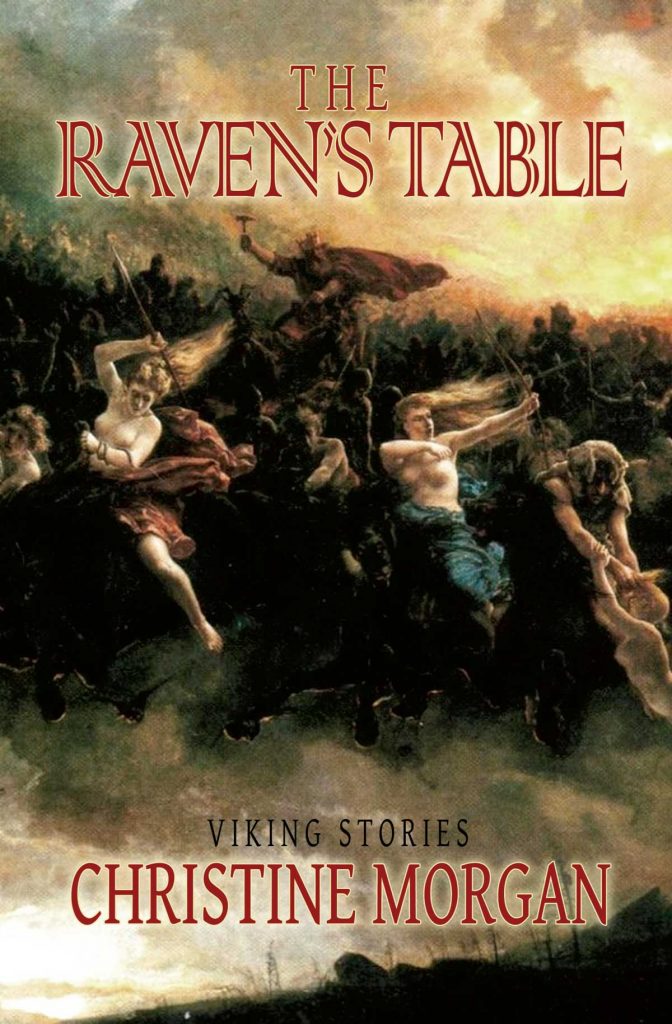 What was it about Vikings that first drew you into them? Can you remember what the first story about them you wrote was?

CM: I’d been a mythology nut, particularly for the Greek myths, since I was a kid. As a teenager, I got into roleplaying games and fantasy. I also really liked pirates and tall ships. Each of those things were each great on their own but none quite managed to hit the perfect sweet spot of overlap. Vikings, however, had all the elements I craved, with the bonuses of rich language and sometimes over the top descriptions. The first Viking story I wrote was also the first one I sold, and kicks off The Raven’s Table… “The Barrow-Maid,” which originally appeared in History is Dead.

What would you do if Odin was real, and you happened to meet him?

CM: Hopefully, recognize him without immediately letting on that I knew, engage him in conversation, use my wits and word-wiles to persuade him I was a person of interest, and then try to get the whole entire grand tour. During which, I’d glean as much information as I could about the myths and stories that have been lost to us since the Viking age. And maybe ask him who actually did write Beowulf.

How did you first get in touch with Word Horde?

CM: I knew Ross from way back, before he began Word Horde, through various conventions and anthology calls and other small presses. When he was at Night Shade, he lobbied really hard to have one of my earlier books taken on, and even though it didn’t work out, neither of us had ever forgotten it. Then, at some event or another I happened to mention a Viking novel I was working on (currently back-burnered for other projects but I really want to get back to it) and he perked right up, so when I realized I had enough Viking stories to my credit to make up a collection, I decided to bounce the idea off him.

How do you think the environment you grew up in has shaped your work?

CM: Heh, until age 18 I lived in the high deserts of Southern California, so there certainly wasn’t much in the way of environmental influence there. Except it did create in me this craving for trees and water and cool weather, which eventually brought me to the Pacific Northwest. Which still isn’t Norway or Denmark or England, but has enough similarities to satisfy.

What are your ties to the bizarro community?

CM: Chosen family, closer than blood. I love the Bizarros. In a way, now that I think of it, they’ve got kind of a Viking spirit among them … there are rules, but there’s also a fierce independence, a value on merit and deed, a warrior’s bond. Besides, they write some of the most amazing stuff! People may think it’s only just calculated outrageousness, tawdry sleaze and tacky crudity for shock value and offense, but I’ve found a level of erudite intelligence and genius in the bizarro community that I’ve never encountered anywhere else.

What’s the scariest thing that’s ever happened to you at your job?

CM: I have been, in my 25+ years of working residential psych, incredibly lucky in that department. I’ve had coworkers who were physically attacked on the job; one guy got stabbed in the head with a broken lightbulb. Another coworker was very nearly sexually assaulted, and then further given the victim-blame treatment by our own supervisors and agency who were supposed to have her back. Me personally, I’ve been yelled at a lot, sometimes threatened, sworn at in some pretty inventive ways, but that’s been about it. Knock on wood.

You’ve written in a lot of genres. Why do you think that is?

CM: I started out writing fantasy because of my roleplaying game hobby, but even then I was a big horror reader. I’d go to fantasy and sci fi conventions, even be on panels, and more often than not, the other panelists would be talking about books I hadn’t even read. Then I got into writing fanfiction (shhh don’t tell, shameful secret under my own name for decades now) and smut, which got me exploring other types of setting than your basic traditional fantasy, and made me confident enough to try writing horror. From there, I’ve kept on trying new things; I love the challenges of themed anthology calls, for instance. But, ultimately, I tend to gravitate toward historical horror and dark fantasy.

CM: I’m a big fan of the classics, but, my current go-to when I am particularly exasperated is “Loki’s goat-tugged NUTSACK!” Which, admittedly, sometimes gets looks.

CM: Given my shoulder and upper back nerve damage issues from some past surgeries, I know I’d be pathetic with an axe, or a big sword. But, a short, sturdy, stabbing-blade like a seax or gladius? That’d be much more my speed. If, that is, I wasn’t also a squeamish wuss. The first time anybody’s blood splurted out on me, I’d freak out.

CM: My favorite would be various varieties of cat; I only half-joke that I’m training to become a crazy cat lady. I currently have four, plus carry a baggie of kitty treats in my purse for neighbor cats I meet while out and about. Big cats, like leopards, especially snow leopards … lynxes … love them. But the animal I most identify with would have to be the raccoon. Nocturnal, waddly, bottom-heavy, clever, nimble-fingered, fastidious handwasher, often misunderstood.

Do you think if a Raven could read your upcoming collection, it would like it?

CM: I certainly hope so, and if it’s Huginn or Muninn, hey, put in a good word with the big boss, pretty please?

What’s next for Christine Morgan?

CM: Well, let’s see … I will have two other, very different books also coming out this year — Spermjackers From Hell, a succubus-summoning-gone-wrong; and White Death, a frontier blizzard novel based partly on actual events but with added snow monsters. I also edit the Fossil Lake anthologies, the fourth of which — SHARKASAURUS! — will be out in hopefully February maybe March. I’ve got stories coming up in several anthologies. Plus, I want to write my Medusa-smut novella to follow up my previous Minotaur-smut one … and there’s still that Viking novel on the back burner … and two books in a psychic detective series I need to edit and submit … and a sort of hard to classify one about a widow and her kids who go to live with her father-in-law, who’s part of a village of way too dedicated medieval living history types, which I also need to edit and resubmit because it was previously published for like two days before the company folded. So, a lot hanging over my head that I should finish up, but in the meantime there keep being all these tempting new anthology calls and invites!