Big news this week: Two Word Horde titles, Nadia Bulkin’s collection She Said Destroy and Ross E. Lockhart’s anthology Tales from a Talking Board have both been nominated for the Shirley Jackson Award. Needless to say, we are honored to have received this recognition, and to be included among so many talented authors and remarkable books. Read the full list of nominees here. 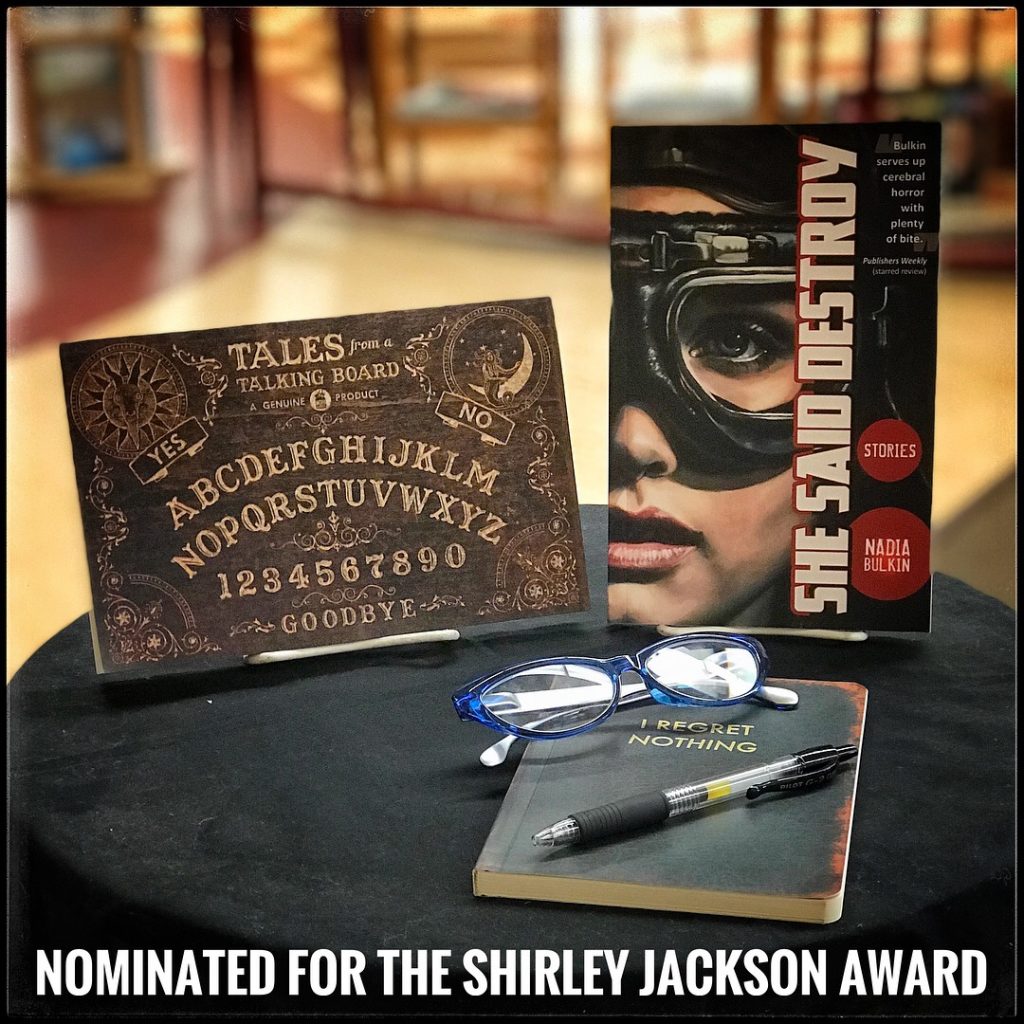 In other news, David Peak’s black metal novel Corpsepaint has been reviewed by This Is Horror, who say, “Bleak is a word used to describe so many releases within the horror and dark fiction worlds… With Corpsepaint, David Peak seeks to raise the bar in the reader’s understanding of what bleak really means.” Read the full review at this link.

And an interview with David Peak is featured this week at Hellnotes, where he talks about the origins of Corpsepaint, black metal, misanthropy, and Romanticism (among other things). Read the full interview here.

We’ve just kicked off our biggest Goodreads Giveaway yet, with copies of Michael Griffin’s The Lure of Devouring Light, Livia Llewellyn’s Furnace, Orrin Grey’s Painted Monsters & Other Strange Beasts, Ross E. Lockhart’s Cthulhu Fhtagn!, and John Langan’s The Fisherman up for grabs. All you have to do is click through, sign up for Goodreads (if you haven’t already), and enter to win. On the Summer Solstice, June 20, we will select winners and ship books (July 4 in the case of John Langan’s The Fisherman).

Here are the Goodreads Giveaway links:

In other news, The Driftless Area Review just posted a new interview with the Bram Stoker Award-winning author of Mr. Suicide, Nicole Cushing, wherein they discuss conventions, “likeable characters,” Louisville, KY, and the definition of evil. It’s a great read.

Coming in July from Word Horde: Mr. Suicide, the debut novel from Shirley Jackson Award-nominated author Nicole Cushing. Here’s your first peek at the cover and the teaser:

Like everyone else in the world, you’ve wanted to do things people say you shouldn’t do.

Maybe the impulse flashed through your brain for only a moment, like lightning, when someone tried to skip ahead of you in line at the cafeteria. Hell, at more than one point in your life you’ve wanted to kill someone; really, literally kill someone. That’s not just an expression. Not hyperbole. Then it was gone and replaced by the civilized thought: You can’t do that. Not out in public.

But you’ve had the thought…

Jack Ketchum, award winning author of Off Season and The Girl Next Door, has this to say about Mr. Suicide:

Novels don’t come much more transgressive than this one, folks. Got a taboo? Watch Nicole Cushing grin while she dances all over it. In other hands that might be reason enough for the witty Mr. Suicide to exist. But this is more and better than that — a truly nightmare world, richly imagined, told to us in a canny, subversive second-person voice that makes you, the reader, the hero of this tale, like it or not. That it also manages to be ultimately life-affirming is yet another wonder.