Our intrepid reporter, Sean M. Thompson, recently sat down with one of our favorite authors and editors, Silvia Moreno-Garcia of Innsmouth Free Press, to talk about her latest anthology, the all-women Lovecraftian anthology, She Walks in Shadows (which we at Word Horde are big fans of). Here’s their conversation…

In your own words, why do you think it’s important for there to be weird fiction (or really any type of genre) collections featuring work exclusively by women?

In the horror genre, and that includes Weird fiction, women don’t seem to get much attention. Whenever there are lists of Top Ten Horror Writers people remember to include folks like King, Lovecraft, yet even figures as crucial as Jackson can slip through the cracks and be ignored. Some anthologies routinely used to include only all men in their TOCs, I’m thinking of several Lovecraftian books which did this not even five years ago. So, there’s a complex problem. Yes, there are less women horror writers than men. But the ones we have can have a hard time drawing attention. And how do we get more women interested in the genre? In creating and consuming and being part of it, that’s not an easy thing to do but part of it must be visibility. Anthologies can help highlight the work of women which we don’t see, but I should say it’s not the only way this should be done, nor is it an instant solution to get more women interested in the field. 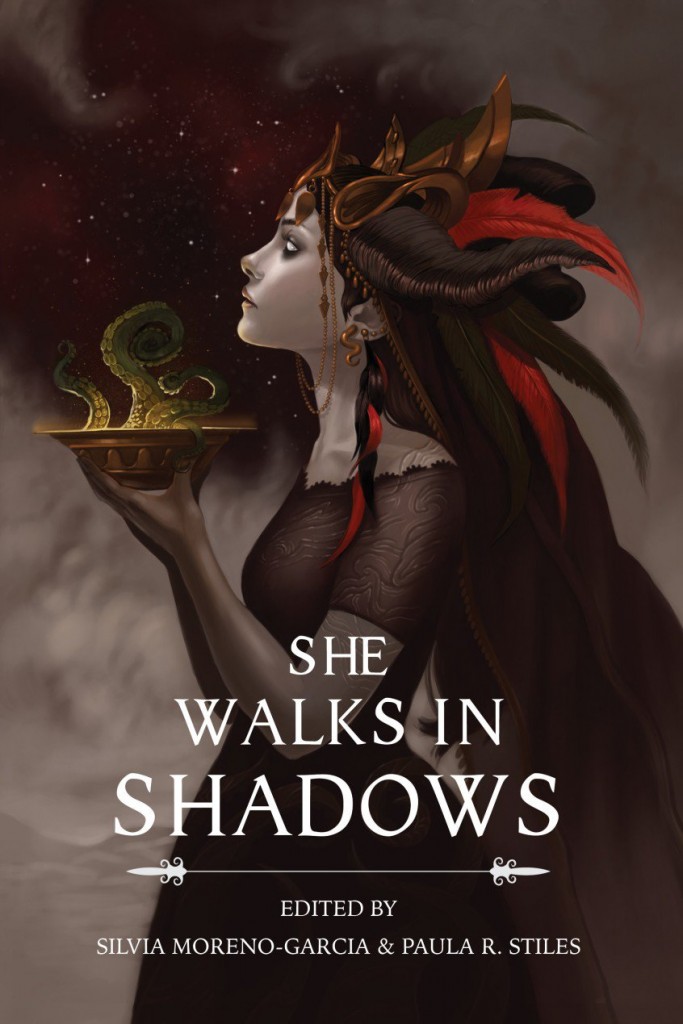 What prompted you to start the process of creating She Walks in Shadows? Was the turn around faster or slower than other editing work you’ve had?

There was a Facebook discussion where someone asked “Do girls just not like to play with squids?” By squids the person meant Lovecraftian stories, there was the assumption there are no women writing it because it doesn’t interest them. There was a long discussion about this on several spaces. At some point someone said women were incapable of writing Lovecraftiana and at another point someone said if you want something different, why don’t you do it yourself. So we did. Of course then some people got mad that we actually were action-oriented and not just talk, but that’s another story.

You have a story in Word Horde’s Tales of Jack the Ripper. Does the Ripper case interest you? Are there any other murder cases that you find yourself terrified by/ intrigued by?

The Ripper is one of the cases I find more dull, in comparison to others because it’s not as bizarre as some other stuff I’ve read. I’m interested in crime, not just murder, and I’ve read a lot of nota roja, yellow journalism, and crime books. I’m curious about people and I like knowing about the investigators, the criminal, the victim. There was a case in Mexico City in the 50s which I find quite interesting and apparently I’m not the only one since they made it into a play and a movie. Basically this guy had a whole family, six kids and a wife, and he kept them locked inside his home all the time. They never went out. They made a living by making rat poison and the father went selling it door to door. And you think for sure they’re going to murder him with rat poison! But they don’t. A daughter throws a scrap of paper onto the street and eventually the cops come and take the guy to prison. But the things that gets me, the thing I go over and over again in my head, is the mother. After the guy goes to jail she says she still loves him and wants him back.

It’s just strange, the bizarre shit that can be going on behind a perfectly normal looking house.

What kind of music did you listen to today?

How goes your dissertation?

Half there. I need to re-write a portion of it but getting there.

Do you think there are certain place which contain some type of power we can’t explain? You hear people talk about, say, The Bermuda Triangle, and no one can quite pin down why so many ships disappear in that area?

I don’t believe in ghosts or monsters or demons. But my great-grandmother was superstitious and I grew up with that, so it’s hard to scrub it off even when you are an adult. I also lived for a bit in Massachusetts and you’re from there so you know what it’s like. A lot of old houses and this kind of sad, depressing feeling in certain spots. There’s a lot of history in certain places, in New England, in Mexico, in Europe of course. And it feels different than the ‘new’ cities like Vancouver where everything is glass, it’s clean, and there’s an optimism which seems to flow from this youth. That said there was a place in Vancouver my husband and I found creepy. We would walk by a building which had been a hospital and was abandoned and we both swore the building was staring at us. It would follow you. And it looked angry. They turned it into condos and it looks very fine now, nothing like it did before, but I don’t think I’d live there. It’s not scientific at all but that building was a nasty building.

Growing up, were there any creepy areas around Mexico City you thought might contain some type of unexplainable forces?

There are a lot of creepy places but I was never afraid of ghosts or the supernatural in Mexico City. My fears were very concrete and very real. Would I get mugged, for example. As a child there used to be some weird knocking in my home. Knocking on the walls. It was made of brick, so it wasn’t like in the US or Canada where you can safely assume the wood is contracting, the floorboards are making noises, it was this knocking that happened when I saw in one room. I’m sure there is a natural explanation but when it bothered me a lot I would yell. I would say “Shut up! Stop!” I figured if it was a ghost it was motherfucking rude ghost and it deserved to be told off. And the noise did subside after I yelled. But I was never afraid. The ‘real’ world was a lot more scary.

Do you have any writing rituals? Molly Tanzer has some very specific ones…

No. I write late at night because it’s the only spare time I have.

What do you feel the role of genre is in regards to fiction?

Does it have to have one? You use whatever tools do the job. Sometimes its genre, sometimes its lit.

Order She Walks in Shadows from Innsmouth Free Press. Order Tales of Jack the Ripper from Word Horde. Silvia’s debut novel, Signal to Noise, is available from Solaris. To learn more about Silvia Moreno Garcia and her awesome projects, visit her website.