Our penultimate excerpt from The Children of Old Leech has arrived, and it’s a doozie. Cody Goodfellow takes us inside The Pageant, the secret, and bloody, gladiatorial matches held in occult locations throughout the world for the entertainment of a select few first glimpsed in Laird Barron’s The Light Is the Darkness, with the Samurai, and “Of a Thousand Cuts.” So prepare your mind by way of strange potions and stranger rituals, sit back, and hang on for a wild ride… 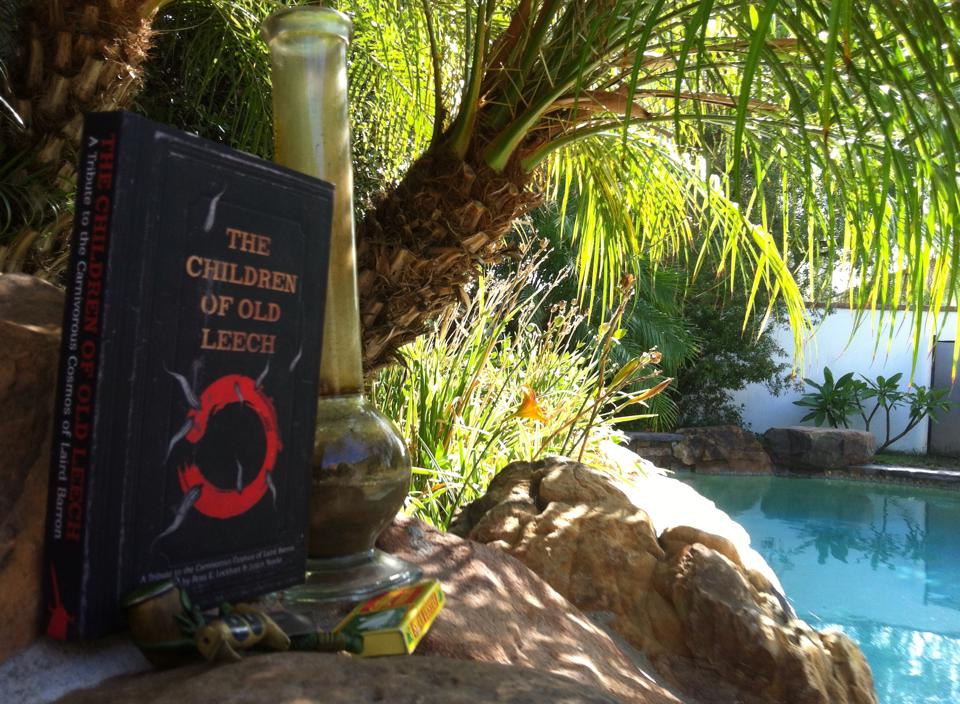 Only in the final, volatile moments of the ludus, when vows made by will are broken by flesh, does the Samurai forget himself and mar his hitherto flawless performance by trying to die.

Dragging his left leg, javelin jutting from butchered knee, hastily resected bowel waving like a gory pennant, yet the Samurai circles his remaining opponent with calculated poise, herding him downwind into the black, creamy smoke wafting from the pyre of his identical twin.

Frenzy and fatigue vie to take the Roman even before the Samurai can close with him. Plunging his broken katana into the smoldering corpse to goad his enemy, the Samurai presents his wakizashi like a gift and settles into a waiting pose.

The Roman has abandoned all technique. Draws a whickering, whooping breath into the broken basket of his ribs, roars hollow blood-flecked hate and charges through charnel smoke, gladius swinging in a blind woodsman’s coup de grace.

And then the moment that puts the lie to perfection, proclaims it the act not of a masterful athlete, but of a slumming, drunken god, or a troubled automaton. Samurai bows his head, arms out in supplication. Throws up an arm, not in defense, but to tear off his helmet. Impossible, of course…

The Roman’s chopping stroke shears an antler from the Samurai’s helmet and glances off his leather cuirass. Overextended, he tramples his opponent and lands among his brother’s blazing remains. Before any outside his inner cadre have noticed his deathwish, the Samurai recovers and hamstrings the Roman. Wakizashi eagerly swims up hyperextended calf muscle, flensing meat catbox-bitter with lactic acid from spiral-fractured bones.

The Roman turns, seemingly revived by blood loss. Brings the gladius down on the Samurai’s shoulder, splitting the torso down to the solar plexus. What little blood comes out at all is almost black.

The wakizashi quivers, sheathed to the hilt in the Roman’s kidney. Samurai’s hand touches but can’t grasp it. The Roman’s spade-shaped sword twisting in the burst balloon of his lung. With his other hand, Samurai draws the javelin from his knee. Nearly faints, but somehow he drives the long spike up through the corded muscles of the Roman’s neck, penetrates the ribbed vault of the hard palate and into the cavernous echo chamber of the gladiator’s brain.

It takes nearly another minute for the Roman’s body to get the message.

It takes the surgical team another seven minutes to separate the bodies and check vital signs to certify the winner. The Roman called Pollux, though stabbed in nine places and burned to the third or fourth degree over ninety percent of his body, almost survives the night.

Shot up with painkillers and adrenochrome, the Samurai lurches out of the arena using the Roman’s enormous gladius as a crutch, to the muted cheers of the small, select audience.

In the time after a battle is when it gets worst. He can almost remember who he is.

He knows he had a name.

But in the Pageant…

Now… again and forever… he is the Samurai.

Rumors swirl about the champion few choose to fight, relegated to sideshow matches in pariah state circuses. All but destroyed in six of fifteen matches in nine years, but undefeated, and none have ever seen his face. Even in the pitch-black demimonde of the Pageant, the Samurai is a cipher, his identity insignificant next to the paradox of his survival. Students of the art point to the many awful injuries sustained; not even the Pageant’s surgeons could rebuild such terrible carnage. Indeed, from one match to the next, the Samurai gains or sheds weight and height. Lord Sun makes no promises regarding the identity of the Samurai. Only the masked helmet and the mated swords and the implacable, elegant butchery remain the same.

And yet, the obligatory devil’s advocates must insist, compare the perfect discipline, the rigor of technique maintained even unto dismemberment, the reflexive disdain for mere mortal injury, the true absence of fear of death or pain. No matter how many bodies he’s gone through, it could only be the same man.