Today’s excerpt from The Children of Old Leech leaves the familiar–and frightening–confines of the Pacific Northwest for a locale on the other side of the world: Vietnam. Let’s crack open a bottle of “Snake Wine” with author Jeffrey Thomas. 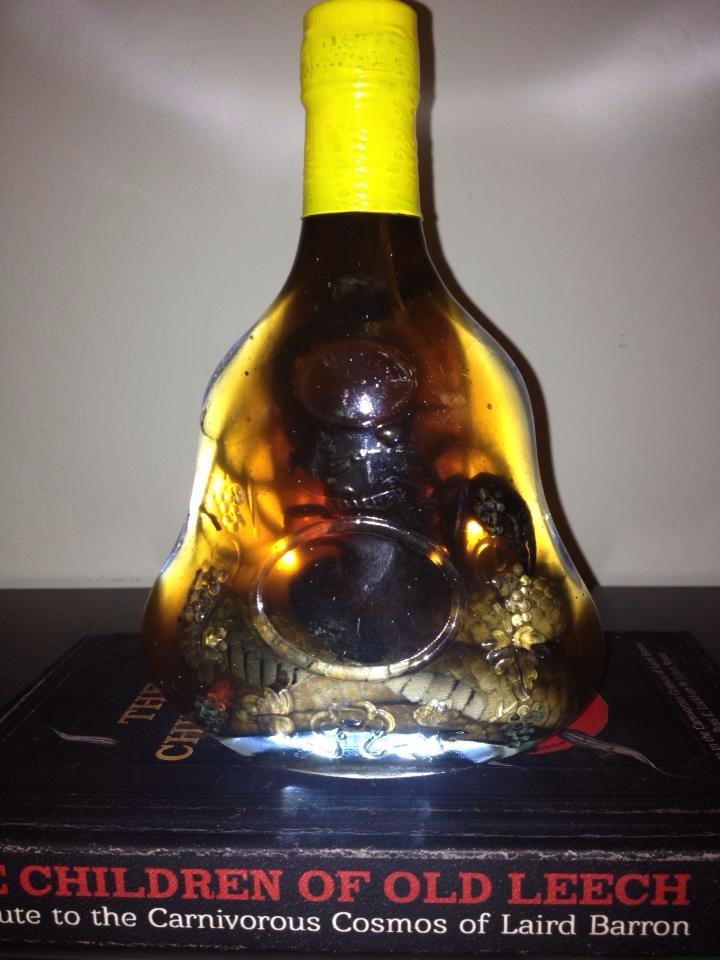 In his flat on the third floor of the narrow building he had bought with all his savings, ill-gotten and otherwise, Hong pulled a bottle out of the plastic shopping bag she had fetched from her Honda’s seat compartment. “My father likes to drink this sometimes,” she told Gorch. Smiling with charming if unconvincing coyness, she further explained, “It’s good for a man’s baby.”

“You know,” she said. She pointed toward his crotch and giggled.

“Let’s have a look.” He held out his hand. “I’ve seen these things a million times here but I’ve never really wanted to try it before.”

“Oh, but you will drink this one, won’t you? Because it is from me?” She passed him the bottle.

It was a bottle of ruou, or rice wine, and he had drunk that on its own. But this type of ruou, which he’d seen sold at gift shops such as those at the Cu Chi Tunnels and the Saigon National Museum, had conspicuous extras stuffed into the bottle. Usually it was a cobra, preserved in the yellowish wine as if pickled in formaldehyde, maybe with a huge black scorpion or a fistful of smaller snakes and some herbs added for good measure. Hong’s gift did have some blanched-looking herbs at the bottom, but no scorpion, and the snake coiled inside wasn’t a cobra, unless its hood was closed.

Gorch turned the bottle around slowly to see it from all angles, and held it up in front of the fluorescent ceiling light. His brows tightened. Definitely not a cobra. And maybe it was a result of the animal’s saturated tissues being distorted, but he almost questioned whether it was even a snake. He was reminded of the animal called a worm lizard, an amphisbaenian, which possessed a long pinkish body that looked segmented like an earthworm, with only a rudimentary pair of forelegs. It almost seemed this creature had such forelimbs, if withered, unless those were just bits of sloughing skin. Its eyes were bleached dull gray. It was looped in on itself within the glass, coiled around and around in a spiral as if chasing itself unto infinity.

“A dragon fetus, perhaps? Ace.” He handed her back the bottle to open. He took down a shot glass. “Are you going to drink it with me?”

“It’s a drink for men,” she told him. “I don’t have a baby.” Her smile was a mixture of carnality and passable innocence that made his stomach squirm with hunger, as if he had his own dragon fetus coiled inside him.

She filled his shot glass, and he took a tentative sip. He tried not to show his disgust lest he insult her. After all, her father had unknowingly sacrificed this elixir for his benefit. It tasted just as he had expected: crude rice wine mixed with the essence of a reptile terrarium.

Gorch didn’t think he’d be stocking this beverage in his pub anytime soon, but he said, “A fine vintage. Cheers.” He took another sip.